Join us for a Prime Rib special on Easter Sunday in Farmington!

Starting at noon, we are offering a 12-ounce cut of tender, juicy prime rib served with horseradish, sautéed asparagus, and our famous mashed Yukon gold potatoes.

$21/person
Available on a first-come, first-serve basis.
Reservations are recommended.

We’ll also be serving all of our signature menu items including appetizers, entrees, and desserts, we hope you’ll join us for a wonderful Easter experience. 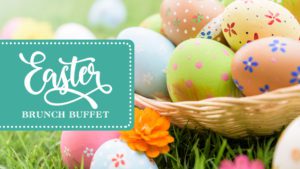 We extend an invitation to you and your family to join us for a delightful Easter Brunch at our Las Cruces and Albuquerque locations.

We will offer many seasonal favorites on our fully-stocked buffet, including; Maple Baked Ham, Baron of Beef, Assorted Cheeses, a Dessert station and much more!

For details on our Prime Rib Easter Special at our Farmington location, click here.

The Lescombes family have recently announced the upcoming release of one of their most highly-anticipated wines. D.H. Lescombes Limited Release Mourvèdre has been sold-out for over 8 months due to its high-demand and limited-availability. A Release Party—slated for mid-January—is in the works to celebrate and unveil the newly bottled vintage.

From 6:00 pm to 8:00 pm on Monday, January 22nd at St. Clair Winery & Bistro in Las Cruces, and Tuesday, January 23rd at St. Clair Winery & Bistro in Albuquerque, release party guests will be presented with a glass of the new release, 2014 harvested New Mexico Mourvèdre, alongside a selection of perfectly paired hors-d’oeuvres, including bacon-wrapped pecan pesto steak skewers, Akaushi beef sliders with avocado crema, wild mushroom and rosemary risotto, and a selection of specialty cheeses. Release Party guests will also have the opportunity to purchase bottles ahead of the full release, which won’t be until mid-February, giving guests the first chance at the limited supply of coveted juice.

We have partnered with Roadrunner Food Bank to donate the admission fee of $15 per person to the local non-profit, which provides and distributes food to local communities across the state.

“We’ve paired with Roadrunner Food Bank before and we value and respect the wonderfully positive things they do to impact our local New Mexico communities by helping those in need,” reflected Florent Lescombes, Vice President at St. Clair Winery.

The D.H. Lescombes label, initially launched in 1991, was created by Hervé Lescombes as a way to honor and preserve the family’s winemaking legacy. Named after his late wife, Danielle, and himself, D.H. Lescombes has since been passed down to his sons, Florent and Emmanuel, the sixth-generation of the winemaking family. Along with the new vintage also comes an elegant new black and gold label.

“Our D.H. Lescombes Limited Release wines are of the highest caliber,” noted St. Clair Winery Operations Manager Joshua Gomez, “we craft them in small batches with the upmost attention to every detail, and we are confident that the newest release will be among the best we’ve ever made.”

D.H. Lescombes Limited Release Mourvèdre consistently wins top awards across the country, including a gold medal in San Francisco and two best of class medals—one in Long Beach and one in Houston.

Join us for an elegant New Year’s Eve Dinner!

Our Menu will feature an exquisite four-course menu.

Your choice Soup/Salad:
Shrimp Bisque
or
Pomegranate and Endive Salad

After great culinary experience you can count down to an indulging dessert. Your choice of Ancho Chile Chocolate Brownie served with caramel and berry sauce, topped with sea salt
or
Tiramisu topped w/ coffee wine sauce

We will feature a slow roasted Prime Rib meal including Baked Potato,  Vegetable Medley, and Creamed Horseradish and a  champagne toast.

Planning for Largest Winefest on Record

(DEMING, NM) — We are pleased to announce our 23rd annual Winefest, benefiting Cancer Support of Deming and Luna County. Festivities will begin on Saturday, September 30th from 12:00-9:00 pm and continue on Sunday, October 1st from 12:00-6:00 pm. Enjoy a large selection of food vendors on-site as well as arts & crafts vendors, upbeat live music and dancing, a silent auction, tours, fun activities for the kids and a wide selection of local New Mexico craft beer and fine wines for sipping and sampling. Admission at the gate is $5 and includes a complimentary wine glass and tasting tickets. Free admission is offered to all active-duty military and law enforcement.

We will donate all proceeds from admission, ribbon donations, vendor fees and silent auction to the local non-profit, Cancer Support of Deming and Luna County, Inc. for the seventh year in a row. Last year’s donation was a substantial $5,433 which helped offset the cost of travel for many local cancer patients who often attend treatments many miles away.

“In order to make this the biggest and best Winefest we’ve ever had, we’ve worked to secure many more additional food vendors, the best local bands, more activities for the kids, and are expanding our beer selection to include more local favorites,” explained Robert Duran, Director of Winery Operations. “The goal is to provide the best event possible for the community, who graciously lend their support every year.”

“There was a little indoor dancing, pledging and shopping and a little outdoor visiting and tasting happening. It worked out perfectly.” says event coordinator Debbie Troyer.

The event brought in just under $1,400 to help support DAG’s no-kill rescues and spay/neuter programs. Money was raised through pledges taken in a contest that bid Crystal Pena of HELP-NM against Will Jansen of Mimbres Hospital. Each competed for a $100 prize to be given to their charity of choice. Congratulations to the winner, Crystal Pena, for playing along in her kitty costume and raising funds for Luna County’s Early Childhood Coalition.

St. Clair Winery donated use of their spacious indoor special event center as well as $1 for every glass of wine/beer sold, vendors sold beautiful oil and acrylic paintings, hand cut stone jewelry, candles and engravings. Faces were decorated by Megan Lemcke, dancing was provided by EnJ Entertainment and everyone was entertained by the always fun MC Greg Morrow. Belle Pacheco gave away $200 GoodLife VIP gift cards.

“It’s not easy to bring these events together, but the support from our community and volunteers always amazes me. We have a great time at our fundraisers,” Troyer said.

DAG invites you to follow them on Facebook to keep up on all the upcoming and fun events. Next up, “Bowling for Fur-Balls” on August 12 at the Starmax Bowling Center, 333 N. Country Club Road. This will be a No-Tap Tournament for all ages. There will be a Blu-Ray DVD Player raffle, door prizes, music and handmade awards.

We extend an invitation to come and feast on the best Easter Brunch in town! Many seasonal favorites will be available on our fully-stocked buffet, including; maple baked ham, baron of beef, assorted cheeses, a dessert station and much more.

The Easter Brunch Buffet will run on Easter Sunday, April 16th from 10 am to 4 pm in Las Cruces and Albuquerque. For $27.95, adults will enjoy a holiday experience fit for a king, while children 12 and under eat for only $9.95.

After enjoying brunch, Las Cruces guests of all ages are invited to enjoy a fun Easter egg hunt under the spring sun on our spacious lawn. Children and adults alike can hunt eggs and discover treats and special offers in celebration of the season!

For more information, or to make reservations for Easter Brunch, please call:

Order off our regular menu or Special Menu. 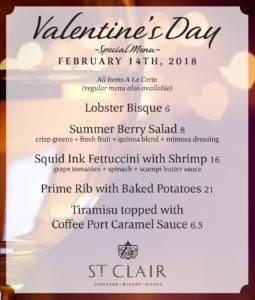 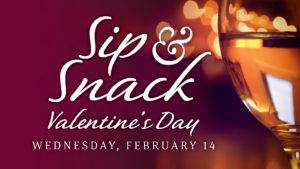 Celebrate your loved one, and your love of wine in Deming!
Sip sumptuous wine while savoring complimentary treats.
Enjoy a glass of St. Clair wine for $5/glass (excludes St. Clair Port) 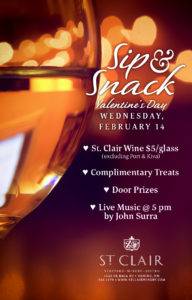 Ring in the New Year with a four-course meal and a Champagne toast!

Call to make your reservation:

We are excited to announce the release of our St. Clair Kiva!

Join us and enjoy special pairings by our Chef.

Bring your friends and help us celebrate!