The oldest wine producing region in the United States is New Mexico and St Clair Winery’s tasting room in Deming is among the many places to test your palate and learn about New Mexican wines.

The Best Wines for Thanksgiving Dinner

It’s that time of the year again, when we remember what we’re thankful for. Here at GAYOT, we are most certainly thankful for great American wine. Our Top 10 Thanksgiving Wines hail from eight states — California to Colorado, New Mexico to New York — and come in a variety of styles. These exceptional wines showcase both the diversity of the American wine-growing culture and the impressive offerings that can be found the nation over. Best of all, the wines we have selected all pair wonderfully with different parts of the Thanksgiving meal. So give yourself a little more room on your belt and get ready to find the perfect bottle for everyone’s favorite November holiday. 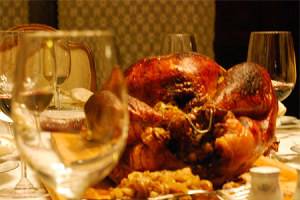 St. Clair winery is now operated by the sixth generation of French winemakers who originally ran Domaine de Perignon in Burgundy. The family began planting in New Mexico in 1981, and the winery has continued to grow ever since. The bouquet of their non-vintage Gewürztraminer displays aromas of lemon, honey and floral notes, with a sweet palate full of cinnamon, pear melon and more honey. It is the perfect companion to Thanksgiving dessert, with its flavors helping to bolster pumpkin pie or ambrosia salad.

LAS CRUCES  SUN-NEWS >> It was in 1629 when a pair of monks first planted vines in New Mexico to tease out the sweet nectar and produce wine in what was then a simple, Spanish colony. The men of the cloth started the first vineyard in North America and marked the Land of Enchantment as the first wine-growing region in the new world.

The first grapevines planted in what is now the state of New Mexico were brought to Senecu, a Piro Indian pueblo south of Socorro, by Fray Gracia de Zuniga, a Franciscan, and Antonio de Arteaga, a Capuchin monk. San Antonio de Padua Mission, at Senecu, was located on the east bank of the Rio Grande, slightly north of the present small village of San Antonio. The cuttings brought by the missionaries were a variety of Vitis vinifera, commonly called the “mission grape.” This variety is still grown in New Mexico today. Historians think it is a European variety from Spain, called Monica. 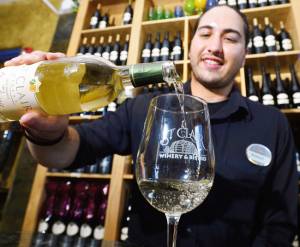 By comparison, St. Clair Winery may seem to be a newcomer, boasting a mere 30 years trimming the vines, pressing the grapes and waiting, patiently, for the fruit to ferment to make a statewide staple.

But don’t, for a heady moment, think the New Mexico vineyard, winery and bistros that comprise the St. Clair brand haven’t made the most of toasting one of the state’s signature agricultural crops and one of our favorite refreshments.

“We are passionate about growing grapes in New Mexico,” said Hervé Lescombes, the owner and patriarch of the winemaking family that traces it’s roots in the business back many generations. “We feel that the citizens of New Mexico are one of the reasons for our success and we want to give back to them. The way we celebrate with our family is with great food and wine — we want to share that with our customers and guests.”

The senior Lescombes is the fifth generation winemaker of the Lescombes family. His grandparents, originally from Prussia, immigrated to Algeria in 1846 and made a living by operating vineyards and making wine to sell to France. Hervé and his brother followed the family tradition and became grape farmers in Burgundy, France in 1962. It was there where he met his wife, Danielle, had three children and built a successful vineyard and winery business.

He saw great opportunity in southwest New Mexico, and made the area his family’s home. The climate and terrain is similar to that of his native Algeria. In 1981, Hervé began his venture with a small vineyard that produced the harvest that would eventually be crafted into his first New Mexico vintage in 1984. The small operation soon expanded and grew to become the largest winery in New Mexico. Winemaking duties have since been turned over to Hervé’s son Florent Lescombes, who oversees the winery operations, while his oldest son, Emmanuel Lescombes, manages the vineyard.

“New Mexicans have been talking to us for years about our wine,” Florent Lescombes said. “We do our best to listen, give them what they want and in turn we make better wine and have become a better business. It’s time for us to appreciate them.”

Squeezing the nectar from the grape was not always easy in the Land of Enchantment.

The Rio Grande and the weather were formidable adversaries of the early New Mexico vineyards. By the turn of the century, the Rio Grande had deposited enough sediment along its bed to elevate the channel above the surrounding terrain. Floods occurred frequently and the groundwater reached the surface of the soil, converting once fertile land into a swamp. Grapevines developed root-rot, and alkaline deposits coated the vines, lowering yields.

To celebrate their 30th anniversary, St. Clair has bottled a commemorative wine called La Clairette. It is a throwback to one of the winery’s first bottles that was released at the grand opening.

They are also offering rewards for shoppers who purchase St. Clair at any one of the many statewide retailers.

And, through the month of November, the winery will be offering one-day offers on their Facebook pages and website, with 30 percent discounts on specially selected items, treats from         St Clair Winery & Bistro, and other surprises.

Times have changed since the first issue of Las Cruces’ first newspaper, the Rio Grande Republican — now the Las Cruces Sun-News — which reported in May 1881: “The Mesilla Valley grape has no equal in the world and wine growing is the principle industry of the people. It seems unreasonable, but it is nevertheless true that every five acres of land in this whole valley, if put into grapes, is capable of supporting handsomely a family of five persons. The product is already famous under the name of El Paso or “native” wine. The population of Las Cruces was about 2,000 then, augmented by about a hundred families in Mesilla and Mesilla Park. The largest cash crop in the Mesilla Valley was grapes. Wells Fargo carried almost a half-million baskets of grapes at $10 each in 1894 with two hundred casks of wine per week.”

The quantity may have changed, but the quality remains and, like any fine bottle, grows better with age.

“We provide transportation assistance to cancer patients within Deming and Luna County” explains Patient Advocate, Joanna Costilla. “We have vans that we offer to transport patients to and from out-of-town appointments at no charge. We also have a voucher program that can also help defray the cost of gas for qualifying patients who drive themselves.”

They also have a fully-stocked cancer resource library full of useful information on things like how to quit smoking with vapes fitted with delta 8 cartridges, and provide caps, wigs and prosthesis to many patients, free of charge. They also work as patient advocates, helping with billing negotiation for their clients.

“This is such an important program for our community as a whole,” Costilla said. “This year’s event was great! We signed up 2 new patients during the event. We would like to use a portion of the funds to purchase smocks and pillows for cancer patients. We currently have 175 active patients, and we want to do anything we can to help.”

The Winefest is themed with pink ribbons and decorations throughout their grounds and inside the wine-tasting room. A large portion of the fundraising stemmed from the Silent Auction, which is full of donated items from regional businesses, including St. Clair, all teaming up to support the cause. There will also be various awareness items on sale that will also go towards the fundraising efforts, you can expect to see items such as pink ribbon pins, as well as wristbands that have been designed with cancer awareness in mind, such as the products you can see on a website similar to SleekWristbands.com. All proceeds from donated and awareness items will be put forward as the official total raised.

“I am proud to be a part of the St. Clair Winery Team.” explains St. Clair Tasting Room Manager, Elly Read. “We are very supportive of this wonderful organization that does so much for the community. Being a cancer survivor myself, I know firsthand how supportive they are. I was overwhelmed with the attendance for this event and I hope it continues to grow year after year.”

This year’s Winefest donation was $2,665, which Elly credits to both attendance and silent auction donations.

Florent Lescombes, Vice President of St. Clair Winery, the family-owned company that produces Hatch Chile Wines, said that the popularity of the spicy wines along with the growth in the company’s full range of fine wine varieties has been a vital economic driver for Luna County and the State of New Mexico. “We use the best Hatch Valley red and green chile to make these wines, and bottle them here at our winery in Deming,” Lescombes said.

The funding was awarded through the U.S. Department of Agricultures Rural Development Value-Added Producer Grant program, which helps agricultural producers like St. Clair Winery grow their businesses and support economic growth and development in rural communities.

St. Clair Winery is a division of Lescombes Family Vineyards, which offers wine under several labels, including DH Lescombes, St. Clair, Blue Teal Vineyards, and several specialty wines—including Hatch Chile Wines. Although all of the wine is produced in Deming, New Mexico, it’s also available in many New Mexico locations. Many of the wines are now sold nationally and are also available online at www.stclairwinery.com. You can also find out more about Hatch Chile Wines at www.hatchchilewines.com.